skip to main | skip to sidebar

Sikh and you shall find... 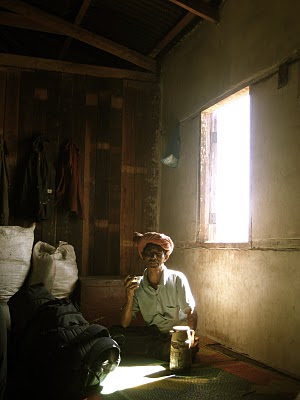 A trek from Kalaw to Inle (Burma) 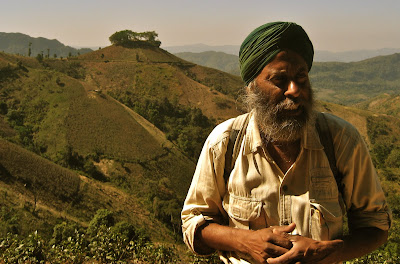 (click on link for whole story and accompanying instamatics!)

Lights out at 10 ...hit the sack! crashed..zzzzz slept great until....those tasty beers are jabbing at my bladder...aaaagh! I get up and stumble around in the pitch black monastery....somehow I get completely disoriented...I can't remember where the doors are!...I hit the flashlight and am horrified as I'm stranded in a sea of crimson robes.I'm smack in the middle of the novices sleeping area....where the heck is that door! I feel my way around the wall... until I get situated. and find my way back to our sleeping area...where I re-boot my brain and set my compass to memory of the previous night....Now I remember...just slink along the right hand wall turn left and feel for the doors on the right....Success, I heave the door open and get greeted by the starry night and moon that lights my way to the designated relief area up the hill....brrrr! it's freezing...
Slept in Nirvana until...
5 AM sharp! We got woken up by the young novices working out their vocal chords! Chanting some Morning Buddhist prayers at the top of their lungs! Did the job as an alarm clock...say no more, we're awake.Excellent breakfast that our guide and not cook had to prepare, due to the cook's raging hangover! Guide asked us to refrain from giving booze to the cook as he had a little "problem" with the stuff. But boy did he make great food!
Next we were to have the "honor"" of handing over a donation to the Abbot for the Monastery. I found a little irksome since I'm sure the trekking organizers already hand over a little sum for the privilege of spending the night there...I didn't want to be a bad sport about it so went along with it and received blessings for safe travels from the abbot in the form of prayers and a string bracelet...(I'm still wearing, and it did work so...thanks!)
After that , off we went in the cool morning onto the gentle descent towards Inthein village on the shore of Inle Lake.
At this point my shins were killing me and I was ready to reach Nyaungshwe...
A nice approach to reach the lake, again with stunning scenery. We get to Inthein around mid day and it's market day. Although this particular place seems geared at half capacity towards the tourist market, there's still all the local hill tribes coming down to trade etc...Quite a pretty setting for a little town. Muddy river, lined by huge trees and a full of the usual riverside activity of bathing, laundry and playing.
We enjoy a last prepared lunch at the boat launch under the shade of trees. Yep , this place is definitely touristy, victim of its own beauty. Dozens of longtail boats are moored, unloading and loading tourists (like us!) I guess the last night at the Monastery was also a bit of a visitors glut as at least 30 -40 hikers like us spent the night there! We better get to Nyaungshwe before all the rooms are full!
We hop on a 5 seater longtail and zoom out the narrow tree lined canal. quite a sight...we hop over small dam like structures regulating the water depth, fun! after 20 minutes of this we reach the open waters of the Lake itself and it's a pleasant ride all the way to Nyaungshwe.
We're taken to the guest house where our luggage was sent to. We bid farewell to our guide and cook.
Due to the poor selection available coupled with the bad vibe I got from the proprietors I and two of my trekking companions take off through Nyaungshwe town until we find suitable accommodations where a shower is in order! Peeee Eeeeew!
Tomorrow it's lake time!
Posted by Mats!? at 3:56 PM

Topics ranging from the Ultra mundane to the Bizarre. Useful tips for travels in Asia.Strange artifacts and alien customs.Fascinating insights.Illustrations and Photos of noteworthy artifacts.